Projecting A welcomes Mary Connealy today as a guest blogger. 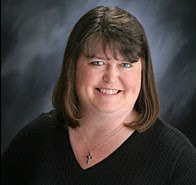 April said something in her interview about getting inside a man’s head so I thought I’d tell you a little bit of what I found while trying to get men ‘right’.

I was inspired by this saying I heard, a quote by George Carlin.
Men are from Earth. Women are from Earth. Deal with it!
Calico Canyon is the story of the prissy Miss Calhoun from Petticoat Ranch and her forced 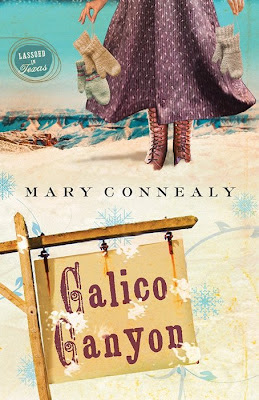 marriage to Daniel Reeves the father of her most unruly students.

Five little boys who are as horrified to have her for their new Ma as she is to find herself stuck with the Reeves men.

She got his boys expelled from school.

He got her fired.

And then a completely innocent compromising situation forces them to marry. I mean sure she spent the night with him. Sure she’s in her nightgown. Sure he slept with her, but...nothing happened.

Daniel cannot get the parson to believe that.

No two people could be more unhappily married.

Calico Canyon is in bookstores now. To find out more, check here:
http://www.maryconnealy.com/

In the meantime, one of the responses I've been getting about Calico Canyon, similar to Petticoat Ranch, is 'How'd you get inside a man's head so well?'

All I can say is...”who knows if I did?” How can any of us really KNOW if we've figured out men?
And what’s with the word MEN, like they’re not individuals, with their own hopes and dreams, personalities and behaviors. CAN we figure out MEN-plural? We can maybe...eventually...figure out A man, one we know personally, but is it fair to paint with such a broad stroke?

Here are some Man cliches....

All men are after only one thing.

All men are alike.

A jump rope ditty I remember goes:
Boys are rotten, made out of cotton
Girls drink Pepsi to get more sexy
Boys go to Jupiter to get more stupider
Girls go to Mars to get more candy bars

Nicole Hollander: Can you imagine a world without men? No crime and lots of happy fat women.

Mary Poppins: “Though we adore men individually, I agree that as a group they're rather stupid."

Marge Simpson: Most women tell you that you're a fool if you think you can change a man- but those women are quitters.

I'm going to mention here that if you think there aren't a bazillion woman bashing jokes out there, you're livin' in a dream world.--here's a good example:

Q: What's the difference between a woman having her period and a terrorist?
A: You can negotiate with a terrorist.

What I'd like to hear from you is 'guy stories'.

Can you think of a story with your son, your boyfriend, your co-worker, your brother, your husband that just makes you say, "He is SUCH a guy!"

And anyone who leaves a comment today gets their name in the drawing for a signed copy of Calico Canyon.

So leave a comment and tell me your 'guy' stories. And don’t even think about topping me. I can tell ‘guy’ stories all day long.

Thanks, Mary! I can think of a few 'guy' stories. I can't wait to see what the rest of the gang comes up with.

I adore my husband and two sons! Sometimes; however, being the only woman in the house can be trying. Men do not listen like women do! They think they own the television remote control. Men think they should take a long nap on the family room sofa. They leave the bathroom a mess. Need I say more?! Thanks, Cindi
jchoppes[at]hotmail[dot]com

Cindi, Late one night a mouse crawled out of the arm of a chair. I screamed so loud, and repeatedly while throwing myself out of the chair that it woke up my husband, who came charging out of his bedroom ROARING.
I mean the guy came out to save me. He woke up to my screaming, figured I was being killed and in the split second he had to think, expected to run out into the teeth of a murderer.
He came anyway.

Then he found out it was a mouse.

He became somewhat LESS heroic and in fact muttered and complained and just generally did NOT give me the comfort and hugs I needed to get past my nightmarish experience.

Now, however, since I refuse to sit in that recliner again, he is overall, happy with that experience since it is the best chair in the living room.

I've been married two years today actually, and I've learned a few things from my husband and from my father, about how men can be.

My husband is the sort to take off his pants in the living room when we're home for the day. THen he leaves them there... right in the middle of the floor. If i pick them up and toss them at him he drops them back on the floor and promises he'd take care of them. Nope... LOL

The other week my sister in law (who lives with my husband and I) had compleated a Purity class with my younger sister. To celebrate their class invited the fathers (in our case my husband who is her brother, their dad passed away two months ago) to a special Father/Daughter Dinner. Since the fathers are the keepers of a girls purity it's very fitting. Any way, there was some confusion about who was going with my sister, so I called my parents house to find out the real information. I'm talking to my mom and she has no idea what I'm talking about.

Remember that it's asbout 230 pm the day of the dinner which starts at 5pm, about an hour away from my house, half an hour from theirs.

My father (who is blind) over hears Moms side of the conversation and asks to speak with me. We clear up the misunderstanding, then he say "I haven't talk to mom about it yet. So if Chris (my hubby) is going, can he pick us up?" he asks.

He's known for two weeks... never told my mom. I got off the phone laughing so hard.

My dad is also convinced often that he tells people things that he never did tell them. There is no arguing with him, just give up and say you forgot. LOL

My dad's awesome though.

My Teenaged brother in law also just moved in with us. He's all guy too. Always not telling us things until three minuets before he needs to be there. His clothes are all over the house. His shoes are in front of the door. We dont have a big entry way, we can't open the door half the time because he leaves his shoes there. Getting on h is case didn't work... throwing them in his room didn't work... AAH! I've become the parent to two teenagers over night! I'm 24... dont even have a baby yet (not for lack of trying)

So is this dropping clothes anywhere a universal man-thing? My bother does it as well. His car and living are constantly full of clothes! My dad doesn't leave them in the living room, but I know he does on the floor of my parents bedroom. I'm 37 and would like to get married someday, but I could never put up with that!
Gail
bookwurm70 [at] yahoo [dot] com