Song Stuck on the Brain: That silly Comet song from grade school. Someone mentioned using it to clean their counters this morning and out of nowhere the song starts running through my head. Do you remember it? "Comet, it makes your mouth turn green. Comet, it tastes like Listerene. Comet, it makes you vomit, so get some Comet and vomit today!" Sad isn't it?

My sister and I both enjoyed this book. It was funny, fast paced and tugged at your heart strings. The characters were unique, and not your standard cookie-cutter variety. I only had 2 slight misgivings about the book.

One was Sarah's style of speaking. It was funny and totally unique (especially her colloquialisms. More often then a duck goes barefoot? Love it.) However, sometimes her unusual voice became distracting, disturbing the emotion of the scene for me.

Second was her physical desciption of her journey through Missouri to Texas. Probably because I'm a Missouri girl, I noticed flaws that most wouldn't. For example, you cannot see the Ozark mountains from anywhere near St. Louis. For that matter, the Ozark mountains aren't visible until you're entering them. Missouri is a bigger state than most give it credit for. St. Louis is at the top of the state and the Ozarks are much closer to our southern border. It's a beautiful area though. So, I highly recommend seeing them for yourself.

Over all though, these didn't detract from the overall strength and enjoyability of the book. I'd recommend it. 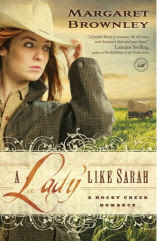 Sarah Prescott has never known a respectable life; just a hardscrabble childhood and brothers who taught her to shoot straight.

Justin Wells left Boston in disgrace, heading out alone on the dusty trail to Texas. But when the once-respected clergyman encounters a feisty redhead in handcuffs with a dying US Marshall at her side, their journey takes a dramatic turn.

His high society expectations and Sarah's outlaw habits clash from the start. With a price on her head and a sweet orphan in tow, Justin and Sarah make the difficult journey toward Rocky Creek. There justice will be meted out hopefully with a portion of grace. 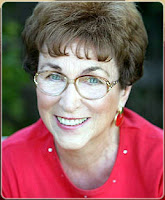 Thrills, mystery, suspense, romance: Margaret penned it all. Nothing wrong with this, except Margaret happened to be writing for the church newsletter. After making the church picnic read like a Grisham novel, her former pastor took her aside and said, "Maybe God's calling you to write fiction."

It turns out God was and Margaret did. She now has more than 20 novels to her credit. In addition, she's written many Christian articles and a non-fiction book. Still, it took a lot of prodding from God before Margaret tried her hand at writing inspirational fiction which led to her Rocky Creek series. "I love writing about characters at different stages of faith," she says of the new direction her writing career has taken, "and I'm here to stay."

Happily married to her real-life hero, Margaret and her husband live in Southern California.
Posted by April Erwin at 1/20/2010