Song Stuck on the Brain: You'll Think of Me by Keith Urban

There's not much to say. I loved the book. It's funny, insightful and touching. Does that sound too simple? You know I'm not I'm always a big fan of the typical Western Historical, but once again someone's proved themselves above average - by far. I don't want to give anything away. All I can say, is that you won't regret this one. It will make you laugh outloud. 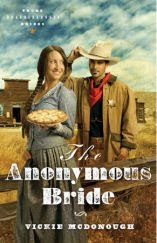 How many brides does one man need?
It's been years, but Luke Davis is back--older and wiser--and still alone. Returning as Lookout's new town marshal, Luke is determined to face the past and move on. He flippantly tells his cousin he'd get married if the right woman ever came along. But then he discovers that the woman who betrayed him is now a widow, and all his plans fall at his feet.

Rachel has carried her guilty shame for eleven years. Her marriage to James Hamilton was not what Luke or the town thought it to be. Now James is dead, and her long-time love for Luke is reignited with his return to town. So when three mail-order brides appear, she panics.

Could they possible find love a second time?

Rachel begs his forgiveness, but Luke finds he has none to give.

And then the brides arrive. Three of them--ordered for Luke through newspaper ads by his incorrigible cousins. The only place in town for them to stay is Rachel's boardinghouse. And none of the ladies is willing to let Luke go. When choosing a bride becomes a contest, the chaos that ensues is almost funny.

When the mayor forces Luke to pick a bride or lose his job, will Luke listen to his heart that still longs for Rachel or choose one of the mail-order brides?

Will Rachel find the courage to tell Luke that she loves him? Or take an anonymous part in the contest for his hand?

If you would like to read the first chapter of The Anonymous Bride, go HERE. 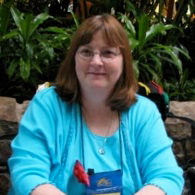 Award-winning author Vickie McDonough believes God is the ultimate designer of romance. She loves writing stories where the characters find their true love and grow in their faith.

Vickie has had 18 books published. She is an active member of American Christian Fiction Writers, and is currently serving as ACFW treasurer. Vickie has also been a book reviewer for nine years.

She is a wife of thirty-five years, mother of four sons, and grandmother to a feisty four-year-old girl. When not writing, she enjoys reading, watching movies, and traveling.
Posted by April Erwin at 4/28/2010