Song Stuck on the Brain: New Divide by Gavin Mikhail
Gavin is a spectacular performer and song writer. This is his cover of Linkin Park's song. Now I love Linkin Park's version, who would have guessed it could be redone in a totally different style and still be amazing. Love his version. Check out his other vids on YouTube.com.

This week the CSFF is sponsoring:

MY TAKE:
Athol Dickson is a very good author. I've read other novels by him and enjoyed them very much. I was a little disapointed with Lost Mission, though. The story idea was promising, but I had a very hard time getting in to the narrative. There is a lot of transfering back and forth between time periods, locations and characters and with very little warning. It made it hard to follow and took to long to get hooked.
Of course, this is my opinion and everyone has different tastes in their literature. If you've enjoyed Athol's books before, give this one a try. You may find you love it, then you'll know that my taste must be poor compared to yours. :)

Among the dirt-poor barrios and ultra-wealthy enclaves lining the hills of southern California, a construction project unearths a long-lost Spanish mission. This discovery sets off a chain of events that presents four unrelated people—Reverend Tucker Lockwood, Concha Rivera, Delano Jones, and Detective Harmony Killeen—with difficult choices. In every case, a greater good could be served with a compromise of some basic moral value. Lockwood could steal to feed the poor. Delano Jones could lie—or at least bury the truth—to protect his monument to God's law. Concha Rivera, a Christian with a strong sense of mission, could trespass to preach the Gospel. Detective Killeen could betray her sense of legal responsibility to defend her family. It seems these devil's alternatives will inspire these modern people to perpetuate the very crime that left the mission buried and forgotten 250 years ago—a mystery that is gradually revealed through research into a mysterious triptych excavated at the mission site, as well as through historical flashbacks. At least two themes of magical realism appear repeatedly through the story. First is the appearances of Santos, a mysterious being characterized by a crooked nose, in both the contemporary and historical storylines. And second, the gradual appearance of faces on the triptych as the story's four protagonists—often with the help of a mysterious Hispanic man with the crooked nose—decide whether they will repeat the mistakes of the past. 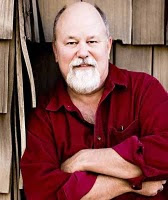 Athol Dickson's university-level training in painting, sculpture, and architecture was followed by a long career as an architect—then his decision several years ago to devote full time to writing. River Rising, named one of the top novels of 2006 by Booklist magazine, received a Christy Award; and his novel They Shall See God was a Christy Award finalist. Athol's haunting mystery novel set on the most remote inhabited island off the coast of Maine, Winter Haven, released in Spring 2008. His novels are known for their richly evocative settings, unforgettable characters, intense suspense, and pervasive sense of “magical realism.” He and his wife, Sue, live in California.

Check out the authors blog to learn more about his books and views.

And check out what the other tour members have to say as well: