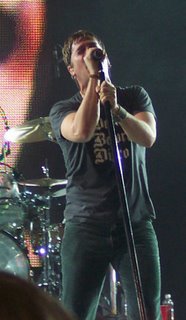 I’m so bummed! I came down with the flu on Friday night and had to miss the Rob Thomas concert. How suckey is that? I did see him in St. Louis in April this year, but I’ve been dying to see him again. He is such an incredible musician and writer.

I gave my ticket to my good friend Angela, so at least it didn’t go to waste. Angel said the concert was awesome of course as was Anna Nalick’s portion. I just keep kicking myself for missing it. To top it off, she said his thighs were as beautiful as ever. Yes, I’m actually saying it. Rob Thomas has the best thighs I’ve ever seen on a guy – and I’m not the only one to say so. And, he has the whole rocker stance down so they are just perfect. Angel said Lindz was taking bites out of them. (Not for real, we’re not the psycho stalker type.) So not only did I miss Rob’s incredible music and amazingly sexy voice, I also missed his incredibly sexy thighs. Double suckey.

I’m determined to see him in concert again though, so I’m watching the tour schedule. Honestly, have talent? Will travel. That’s what road trips are all about, the concerts. His would have been my last show for the year, but summer is not far away, I’ll have to pin my hopes on more music then.