Song Stuck on the Brain: Harlem Globe Trotters Theme. There you go, can't help but whistle it, can you? It was the last thing I heard on the radio this morning before entering the Bat Cave. I finally quit whistling it around eleven 0'clock, but coming back from lunch they played it again. Darn them.

Do you every get food obsessions? Something sounds good so you eat it, but it's just not as good as you had hoped, so you keep trying the same food at a million different places hoping you'll find the one that will satisfy your craving...

Oookay. Maybe I'm the only one with this little problem. 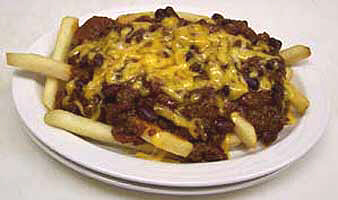 Anyway, lately it's been chili cheese fries. I saw them advertised at Hardee's, but ended up at Sonic for lunch instead. So I ordered the Super Sonic Extreme Tater tots, which are better than their fries. I hate Sonic fries. Extreme includes the chili and cheese, plus onion, jalapenos and ranch dressing.

They're good, but their just not chili cheese FRIES. So my craving was not satisfied. I did finally end up at Hardee's a few days later, so I gave theirs a try.

Wow. We're talking ambrosia here. Best chili cheese fries I've ever had. Which is saying a lot, because I'm really picky about my chili. Most restaurants have gross chili. But Hardee's? Fantastic.

So did this satisfy my craving for chili cheese fries? Not exactly. Now I'm craving them because they were so fantastic.

We went to Dairy Queen last week and ordered theirs, but much like the rest of their food (except the ice cream) it left a LOT to be desired. The craving continued.

Today we tried the chili cheese fries at Backyard Burger. They've got great food, so we thought it would be safe to try.

Nope. Worst chili cheese fries EVER. The chili is vinegary to the max but smells a little like sweet cloves. Weird.

SO, tomorrow we're going back to Hardee's. One last batch of the ultimate before the New Year's diet kicks in.

After that the addiction must die. If not, I'll be starting a 12 step program.

Step 1. Acknowledge the addiction
Step 2. Step away from the chili cheese fries
Step 3. Love yourself more than the ultimate, fabulous, ambrosia like flavor which is Hardee's Chili Cheese Fries.....

Yeah, I know what you mean! I am thinking of starting a walking club...you gals interested? We would meet at least once a week to walk together somewhere. Inside until it gets warmer, then outside. Let me know what you think.