I have to hand it to Karen Hancock. She has definitely produced a masterpiece in this final book of her series Legends of the Guardian-King. From the moment I picked up the first book and was introduced to Abramm Kalladorne I have wept at his trials, suffered anger at the injustices that continued to pound him, delighted in his triumphs and brief moments of happiness and held my breath, torn between hope and doubt, for his ultimate success against the shadows and his countless enemies.
Spoilers:
Shortly after writing my first review all my worries about Taphenia's threats, and Trap and Carissa's relationship were put to rest and bigger problems presented themselves. I knew Abramm was in trouble when Taphenia was defeated so swiftly. Something stronger and more menacing would befall him since I still had so much of the book in front of me. Every day that delayed his return to Maddie had me as frustrated as Maddie. How could Eidon keep him away from his wife and children for so long? It wasn't fair. Why did he have to get lost in the desert? How could Maddie even consider marrying Tiris? My frustration grew until I was on pins and needles.
And then the worst. Abramm's beloved friend and trusted advisor was betrayed and killed just when he was needed to protect Maddie from a fate worse than death. My mind could not take it in. I denied the possibility of his death just as I have denied the death of other beloved characters. Gandolf, Chewbacca, Dumbledore, Durnik and Brennen Caldwell all of which died but whom some of which their respective authors chose to save them from death's darkness. I clung to the hope that would be the case here. Eidon had promised to restore all and more, he could not take Trap from Abramm in this way. 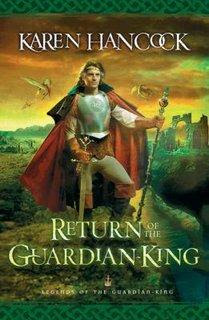 I loved Rolland's character. His loyalty and steadfastness reminded me of Sam Gamgee from Lord of the Rings. He was quiet, strong and loyal. I often wondered why Karen waited so long to lift the veil from his eyes so that he would recognize Abramm for who he was, but it turned out alright in the end.
And as for Maddie's struggle. I feared the worst when she was handed over to the enemy and rejoiced in her unexpected rescue. Then when she relented to the pressures of those around her and said yes to Tiris I wept for her hopeless situation. I understand the reasoning but my mind still shouted "how could she?" Why did Eidon not send her more dreams? She always knew what Abramm was going through. How could she not know now? Why did Abramm not send messengers of his safety? If only she would have trusted her first impressions of Tiris and had nothing to do with him from the start. Her intuition told her there was something not right with him.
Besides Tiris, Ronesca was another infuriating character. I must say I did not grieve her fate when at last she died. She deserved what she got, though Iam not sure Leyton did. As angry as I am at what he did, I believe he repented of his betrayal and would have been a better man if he had survived. I am not sure yet how I feel about Gillard. It seems at the end there that he also recognized the error of his ways and could have been redeemed, but I am not sure he deserved it. But then, who am I to say who deserves salvation?
I admit I was moved to tears in the last few pages as Abramm talked to his children, especially Ian. I am glad he finally got past his hurt and opened his heart again to his father. I could not have born it if the series had ended with such a drift between father and son.
End Spoilers:
Okay, so it's really not fair that you now all know how the book will end, but you still have to read them and be tortured by the details. :o) I loved them all. And really, I think she gave it to us easy in the last two books as I remember being much more frustrated in the first two. Or perhaps I have grown in the Light and knew that she would restore all that she took as was her only choice since she as the author had created the boundaries she was now constrained in. But still she could have tortured her readers a lot more than she did. Not that I am complaining since the torture was enough to make me set the book aside for days on end before forcing myself to reach for it again. But today I could not put it down, determined to finish it. And now that I have, I am glad that my friend April started me on this path.
I admit to having seen the book in the book store and even to have read the first chapter online but had decided I did not think I would like the book. And indeed I did not so much like it but was enspelled by it. Tortured as Abramm was tortured, plunged into the Shadow as he had everything he knew and loved ripped from him time and time again. By the end of book two is it any wonder that I didn't read book three for more than a year after it was given meas a Christmas gift? I knew what he would be facing and after all he had been through wasn't sure how much more the author would put him through. :o) But in the end, the author always knows what is best for her characters. :o)
This last book is the crowning jewel in a series that is at times both heart wrenching and heart warming. Feelings of frustration, aggravation and hope will take you from wanting to walk away and forget about Abramm, to turning the page before you set the book down. Ultimately you are left with the question: would I pass Eidon's test as well as he? I can only pray that I will, when the time comes.
Thanks for enriching my life with your stories Karen! I will never forget them, and your characters will long be heralded as much beloved friends, whom I am sure I will visit often. As I do all my favorite books.
Sariah
Thanks again Sariah, for sharing your thoughts. I hope the rest of you out there have enjoyed having Sariah as a guest blogger. Be sure to leave your comments and let us know what you think.
A.
Posted by April Erwin at 4/23/2007

The latest books reviewed here for you! We review books in all genres: Fiction, Non-Fiction, Young Adult, Children's Books and Memoirs.

Thanks, Sariah -- and April, for giving over your blog to her. Great review. I loved how you drew us in to your own experiencing of the story with so much detail. Sorry to have provided so much torture for you, though. Smile

I think... Or maybe not. I really believe that the higher the stakes and the greater the cost, the more satisfying the victory! In books as well as in life.

That's so true, Karen. The higher the stakes, the bigger the fear... and the bigger the courageous heart that overcomes that fear. The greatest prize would never have been attained without a lot of blood, sweat and tears. :)