Song Stuck on the Brain: Elvira by the Oakridge Boys

Today the CSFF is hosting a blogtour for:

I've been a long time fan of Stephen R. Lawhead. It started with the Song of Albion series. From there on out I've been hooked, reading everything of his I can get my hands on. I've not been disapointed once. His detailed research is obvious, but never dry or boring. Instead, I'm usually left gripping the book with sweaty hands. Scarlet is book two in the King Raven Trilogy, but if you enjoy celtic mythology, his other series are well worth the read, as are the more main stream books like Dream Thief. 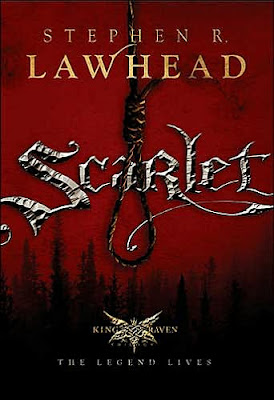 After losing everything he owns, forester Will Scarlet embarks on a search for none other than King Raven, whose exploits have already become legendary. After fulfilling his quest--and proving himself a skilled and loyal companion--Will joins the heroic archer and his men.

Now, however, Will is in prison for a crime he did not commit. His sentence is death by hanging--unless he delivers King Raven and his band of cohorts.

That, of course, he will never do.

Wales is slowly falling under the control of the invading Normans, and King William the Red has given his ruthless barons control of the land. In desperation, the people turn to King Raven and his men for justice and survival in the face of the ever-growing onslaught.

From deep in the forest they form a daring plan for deliverance, knowing that failure means death for them all.

Scarlet continues Stephen R. Lawhead's riveting saga that began with the novel Hood, which relocated the legend of Robin Hood to the Welsh countryside and its dark forests. Steeped in Celtic mythology and the political intrigue of medival Britain, Lawhead's trilogy conjures up an ancient past and holds a mirror to contemporary realities. Prepare for an epic tale that dares to shatter everything you thought you knew about Robin Hood. 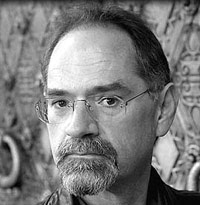 Stephen R. Lawhead is an internationally acclaimed author of mythic history and imaginative fiction. His works include Byzantium, Patrick, and the series The Pendragon Cycle, The Celtic Crusades, and The Song of Albion.

Stephen was born in 1950, in Nebraska in the USA. Most of his early life was spent in America where he earned a university degree in Fine Arts and attended theological college for two years. His first professional writing was done at Campus Life magazine in Chicago, where he was an editor and staff writer. During his five years at Campus Life he wrote hundreds of articles and several non-fiction books.

After a brief foray into the music business—as president of his own record company—he began full-time freelance writing in 1981. He moved to England in order to research Celtic legend and history. His first novel, In the Hall of the Dragon King, became the first in a series of three books (The Dragon King Trilogy) and was followed by the two-volume Empyrion saga, Dream Thief and then the Pendragon Cycle, now in five volumes: Taliesin, Merlin, Arthur, Pendragon, and Grail. This was followed by the award-winning Song of Albion series which consists of The Paradise War, The Silver Hand, and The Endless Knot.

He has written nine children's books, many of them originally offered to his two sons, Drake and Ross. He is married to Alice Slaikeu Lawhead, also a writer, with whom he has collaborated on some books and articles. They make their home in Oxford, England.

Stephen's non-fiction, fiction and children's titles have been published in twenty-one foreign languages. All of his novels have remained continuously in print in the United States and Britain since they were first published. He has won numereous industry awards for his novels and children's books, and in 2003 was awarded an Honorary Doctorate of Humane Letters by the University of Nebraska.

Visit the other tour members at these blogs:

So my question is, how many Lawhead fans became fans because there wasn't really anyone else doing Christian fantasy? Just a thought that popped into my head after reading that you, along with so many others on the tour, have been long time fans.

That's a good question, Becky. Although, as much as I love good fantasy, it was the celtic spin on his work that caught my attention first. That was new for the inspirational market too. I'm so addicted to reading about celtic history and mythology.

I started with the Albion trilogy as well... and probably due to a lot of what Becky mentioned - one of the few Christian Fantasy authors that I could find! I truly fell in love with his Celtic interests during that series!