CFBA: The Falcon & the Sparrow by M. L. Tyndall

Song Stuck on the Brain: Every Breath You Take by The Police

Wow, what a great read! I completely fell in love with Dominique and Chase. Their romance was moving and heartfelt and I very nearly bit all my nails off in frustration, just waiting for the two of them to get it together! When they did, it was fantastic. I couldn't help grinning like a goof.

What made this story all the more incredible, was the faith interwoven so carefully throughout the story. Dominique's questions about her faith and ability to serve God in a bad situation rang true because it's a situation all of us find ourselves in at some point. I love how the author showed Dominique's struggle, as well as the hope she finds to keep going. The man in black that shadows her was a truly genius addition to the story.

In fact, all the characters were very well written. On first glance you might find them typical. A harsh, rugged Admiral; a shrewish lady rival; a bossy older sister out to get the heroine... but Tyndall takes the reader so far beyond the surface and I was surprised more than once by a characters depth and originality. 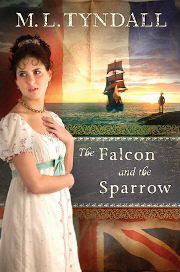 When Mademoiselle Dominique Dawson sets foot on the soil of her beloved homeland, England, she feels neither the happiness nor the excitement she expected upon her
return to the place of her birth. Alone for the first time in her life, without family, without friends, without protection, she now faces a far more frightening prospect, for she has come to the country she loves as an enemy-a spy for Napoleon.

Forced to betray England or never see her only brother alive again, Dominique has accepted a position as governess to the son of Admiral Chase Randal, a harsh man, still bitter over the loss of his wife. Will Dominique find the strength she needs through God to follow through with the plan to rescue her brother? Will Chase find comfort for his bitter heart in God's arms and be able to love again?

And what new deceptions will they both find in France when they arrive to carry out their plan?

If you would like to read an excerpt of The Falcon And The Sparrow, go HERE

M. L. (MARYLU) TYNDALL grew up on the beaches of South Florida loving the sea and the warm tropics. But despite the beauty around her, she always felt an ache in her soul--a longing for something more.

Her current releases in the Legacy of The Kings Pirates series include:The Restitution, The Reliance, and The Redemption

Email ThisBlogThis!Share to TwitterShare to FacebookShare to Pinterest
Labels: CFBA, M. L. Tyndall, The Falcon and the Sparrow

Hi April! I'm so glad you enjoyed my book! Thanks for the wonderful review. God Bless,
MaryLu