GRPR: Beyond the Night by Marlo Schalesky

Song Stuck on the Brain: It Don't Matter To Me by Bread 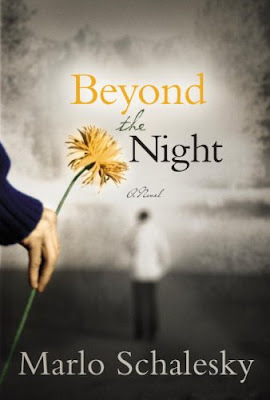 With music of the 1970s playing throughout, Marlo Schalesky has joined forces with Multnomah Books to release Beyond the Night, the first of three books whose endings aren’t what readers expect.

A wet road, the dark of night, and pouring rain become the cruel combination that forces Maddie and her husband’s car off the road. Now Maddie lies in a coma, her faithful and loving mate by her side speaking words of encouragement.

As she rests in the darkness of her hospital room, the life journey Maddie has traveled plays again in her mind. Scenes flash in between whispers of a voice she’s grown to love. “Maddie, remember with me. Remember the day I fell in love.”

A playful kiss igniting romance between friends, an extraordinary love, a universe of fear and darkness, a triumph over blindness in both eyes and soul. Maddie’s walked a hard road and succeeded against the odds.

But then came the night that changed everything.

Marlo Schalesky delivers a powerfully emotional story that is certain to take both Maddie and the reader Beyond the Night. 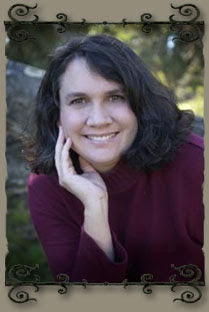 Wind Remembers, Cry Freedom, Freedom’s Shadow, and Empty Womb, Aching Heart. A graduate of Stanford University, Marlo recently earned a Masters of Theology with an emphasis in Biblical Studies from Fuller Theological Seminary. She also runs her own construction consulting business as well as an engineering firm that she and her husband own. Married nearly twenty years, she lives with her husband, Bryan, and their four daughters in California.

Q&A with Marlo Schalesky:
Q. Marlo, you’re a woman full of surprises! What made you decide to work in the construction industry? Isn’t that a field normally dominated by males?

A. Well, something has to pay for my Starbucks venti white mochas! But seriously, when I met my husband at Stanford years ago (Note: A number of incidents in Paul and Maddie’s love story in Beyond the Night grow out of my story with Bryan . . . I’ll let the reader guess which), he was majoring in Engineering, and I majored in Chemistry. After graduating, he got a job in sales in the construction industry (roofing); I did chemical research. We discovered that there was a lot of chemistry involved in roofing. So, about ten years ago, we decided to open our own engineering firm that specialized in roofing and waterproofing. From the contacts and experience I gained there, in January of 2007 I opened my own construction consulting firm where I can use my left-brained skills (writing novels uses up all the rightbrained energy) to earn a few bucks and pay for those fancy coffees. And I have to admit, I enjoy doing something that’s so different from my writing.

It’s refreshing to deal with numbers and forms, caulking and chemicals, instead of only words and ideas. It makes for a nice balance in my life.

As for construction being male-dominated – it certainly is as far as actual construction workers and facilities managers. But there are plenty of women working in the administrative aspects of the business, which again makes for a nice balance. It’s fun to meet different kinds of people, and a number of them have also become my readers. Others just think I’m crazy – trying to run a business, writing novels, and take care of my four little daughters. But, hey, with God all things are possible . . .

Q. How did you decide to write a series of novels with surprise endings?

A. It was all God’s fault. And it started with a dream. Not one of those “I have a dream” kind of dreams, but a real, honest-to-goodness, it’s-3am-and-I’m-asleep kind of dreams. I dreamt Paul and Maddie’s love story. And when I woke up, I couldn’t get the two of them out of my head. I thought about them in the shower, on the way to seminary classes, in the grocery store. Everywhere! For weeks, I found myself replaying tidbits of their story in my mind, until I finally figured out that maybe God wanted me to write their story.

“But,” said I to God, “there’s not enough here. It’s not compelling enough.”

“Yes,” said God to me, “but Maddie’s going blind.” (Well, maybe it wasn’t so much in those words, but just in the revelation of what was going on with Maddie.)

“Oh,” said I, “That’s very interesting. But it’s still not enough. Not quite.”

Two more days went by, and Paul and Maddie’s story still kept teasing my mind. “It’s not enough,” I kept saying to God. “There’s got to be more.”

And then I saw it – the big twist. The incredible truth that I had no idea about before. It took my breath away. So, after I finished picking my jaw up off the floor, I sat down and starting working on the proposal for Beyond the Night.

As I fleshed out the story, I realized that this is exactly the type of book I’d like to keep writing – something with the poignancy of a Nicolas Sparks love story (without the sap!) matched with the knock-your-socks-off twist of a M. Night Shymalan movie (without the horror!). That kind of story excited me, spiritually, emotionally, mentally. And I figured that there had to be more people like me out there – people who want to be both moved emotionally and surprised and delighted intellectually. People who want to be changed, challenged, and caught with wonder by a story. People who just want something more in their stories, because the typical story is just not quite enough.

Happily, Multnomah agreed. When my agent sent them the proposal for Beyond the Night, they asked for two more ideas in one week. But how could I come up with two more stories like that in such a short time? It usually took months, even years, for me to find the right story. But God was faithful again. Onthe first day of that week, the storyline for Book 2, Faces in the Sand, came to me. And on the last day of the week, I got the idea for Book 3 (with five very nervous days in between). Multnomah contracted all three, and now I’m pressing forward, writing these books that God has given me to write, and prayingevery day that I’ll see the story as He has dreamed it. And I’m hanging on to the belief that He who gave me this mission will be faithful not only at its inception, but in the execution and beyond.
Q. You’ve been in the publishing industry for a while now with four previous novels and a nonfiction book to your credit. How has your publishing experience lined up with expectations? How has it not?

A. You’ll find that most of my books include a theme about life not turning out the way you plan or expect. That’s because God has given me the equivalent of a PhD in “My plans are not your plans, saith the Lord . . .” And my publishing experience has been a significant course in that learning process.

Nothing in my experience with publishing has gone according to expectation. At first, that was just because I was naïve. I thought I just had to write some good stuff, and I’d get a contract for my first books, which, at the time, was an end times series (this was before the Left Behind craze). So, I went to conferences with my proposal and heard from all the editors, “We aren’t interested in this type of futuristic fiction.” What they meant, of course, was they weren’t interested in that type of story from a newbie like me.

So, I tried historical fiction. And got a contract just as expected. Except the contract was canceled . . .that was unexpected. And it hurt.

Eventually, another publisher contracted that book and it became my first published novel. I received a few other contracts, had those books published, and then came another rude awakening in the form of sales figures. I expected to write a good book and have it do well. But that’s not how it worked for my third novel. Because of internal publishing house changes, sales went badly. And there wasn’t anything I could do about it. That was hard because I’d written the story as an act of faithfulness to God’s call, I felt He was pleased with it, I’d done everything I could in promotion and marketing, and still it “failed.” Ouch!

At that time, I was told to expect the numbers for that book to prevent other publishers from wanting to publish future books of mine. “It would have been better for you if that book hadn’t even been published,” they said. But God was about to crush that expectation as well.

A publisher contracted my next historical novel, I wrote it, and then just before it was scheduled for release, the company went through a large restructuring – they cut fiction, most of the members of the PR department left, the fiction editor left, and my book was stranded. I hadn’t expected that either.

But God was up to something in the meantime – a new story idea that I simply had to write. A story that so moved the Multnomah team, even in its synopsis form, that they wanted to publish it despite my previous sales numbers. They wanted that story, plus two more. The story was Beyond the Night. It came as an unexpected gift from God.

And just like everything else in my publishing experience, it has taken me by surprise. Pre-readers are calling me and emailing saying how the story has moved them, impacted them. But it’s not because of my great planning. It’s because God has again done something that I didn’t foresee, didn’t expect. And I thank Him for it.
Posted by April Erwin at 7/02/2008

Email ThisBlogThis!Share to TwitterShare to FacebookShare to Pinterest
Labels: Beyond The Night, GRPR, Marlo Schalesky