After all the fantastic endorsements attached to this book, I had to wonder if I had anything else to add. Of course praise is always good, and you can never have enough of that kind of endorsement, so I'm tossing in mine to the ever growing list.

Jordyn Redwood's book may be slim in comparison to a lot of the heavy tomes in her genre, but she's definitely not slim on plot or light on suspense. It's obvious from page one that the author knows her stuff, the ebb and flow of the ER and the language unique to it's inhabitants is enticing and understandable. The suspense kicks in on page one with a missing set of keys, although it's only a passing glimpse of what's to come.

DNA testing isn't a new topic, nor is her villain's condition (I won't name it, hate to spoil the fun.) I knew of the condition although I'm not sure how broad a knowledge the public holds on it. What made it even more intriguing was the twist she gave to his already very unique condition and that is what had me guessing to the very end. Even though I was sure I knew the guilty party, I just couldn't explain the DNA problems. As the killer closes in I felt just as frantic and frustrated as those trying to prove his guilt and save Lilly.

As a Christian novel, it gave a unique look at the issues of rape, abortion and the post traumatic stress that often accompanies it, not by presenting the main character as a woman of faith, but as one with no faith that must find something to hold tight to in order to survive. Believer or non-believer we all face a time in our life where our beliefs are held up to a light for examination. A time to decide if what we believe is true or false, a time to decide what and Who to cling to. It kept me captivated to the very last page. I look forward to the rest of the series. 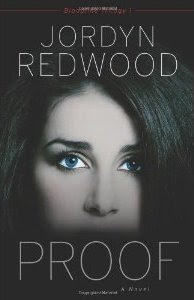 Dr. Lilly Reeves is a young, accomplished ER physician with her whole life ahead of her. But that life instantly changes when she becomes the fifth victim of a serial rapist. Believing it's the only way to recover her reputation and secure peace for herself, Lilly sets out to find--and punish--her assailant.

Sporting a mysterious tattoo and unusually colored eyes, the rapist should be easy to identify. He even leaves what police would consider solid evidence. But when Lilly believes she has found him, DNA testing clears him as a suspect. How can she prove he is guilty, if science says he is not?


“Jordyn Redwood makes quite a splash with her debut novel. PROOF is a hard-edged mix of medical thriller and crime chiller that grabs you on the first page and doesn’t let go until the end. This one will keep you up way past your bedtime.”
—Rick Acker, best-selling author of When the Devil Whistles


“From the very first chapter, the first page even, Jordyn Redwood pulls the reader into a story that won’t let go. PROOF is proof enough for me that Jordyn is the real deal: an author who knows how to weave a tight story, write descriptive, authentic prose, and deal with some pretty hefty issues. I’m a fan!”
—Mike Dellosso, author of Frantic and Rearview (a 7 Hours story)


“Debut novelist Jordyn Redwood has used her experience as an ER and ICU nurse to craft a blend of medical thriller and police procedural with twists and turns to keep fans of either genre turning pages.”
—Richard L. Mabry, MD, author of Lethal Remedy and the Prescription for Trouble series


“A rollercoaster of a story. Jordyn Redwood’s PROOF has everything you could want in a thriller—believable characters, a villain who makes your skin crawl, a touch of humor, and a twisting plot—all bound by fascinating medical and scientific details. What a fabulous debut!”
—Sarah Sundin, award-winning author of the Wings of Glory series


“Jordyn Redwood may be new on the scene, but she writes like a seasoned pro. PROOF is one of the best books I’ve read in a long time with well-drawn characters including a villain I despised and a hero and heroine I rooted for. I thought I would just take a peek at the first chapter and finish the story later. I thought wrong. I read late into the night, lost sleep, and put off my own writing to finish this book. I’m eagerly awaiting Jordyn’s second book and will be first in line to purchase it the day it releases.”
—Lynnette Eason, best-selling author of The Women of Justice series


“I love a great medical thriller and I’m glad to add another author to my list. Jordyn Redwood writes like the medical insider she is. A gripping tale laced with realism, sleep-robbing excitement, and something every reader loves: hope.”
—Harry Kraus, MD, best-selling author of The Six-Liter Club


“PROOF by Jordyn Redwood is a gripping medical thriller written with vivid detail from an author who knows her subject firsthand. A serial rapist is at large in the town—in the hospital, even? Can Lilly trust anyone? Even her closest friend? And just when you think you can relax, the stakes get even higher.”
—Donna Fletcher Crow, author of The Monastery Murders


If you would like to read the first chapter of Proof, go HERE.

Jordyn Redwood has served patients and their families for nearly twenty years and currently works as a pediatric ER nurse. As a self-professed medical nerd and trauma junkie, she was drawn to the controlled chaotic environments of critical care and emergency nursing. Her love of teaching developed early and she was among the youngest CPR instructors for the American Red Cross at the age of seventeen. Since then, she has continued to teach advanced resuscitation classes to participants ranging from first responders to MD’s.

Her discovery that she also had a fondness for answering medical questions for authors led to the creation of Redwood’s Medical Edge at http://jordynredwood.com/. This blog is devoted to helping contemporary and historical authors write medically accurate fiction.

Jordyn lives in Colorado with her husband, two daughters, and one crazy hound dog. In her spare time she also enjoys reading her favorite authors, quilting, and cross-stitching.
Posted by April Erwin at 9/05/2012