The Orphan King by Sigmund Brouwer


The Orphan King
by
Sigmund Brouwer

I'm a huge fan of anything Merlin or King Arthur related, so when I saw a new series for young adults featuring the famous legend I had to read it.

Merlin and Arthur aren't presented in book one, instead it's the story of a young man denied his birthright that is set on a mission to become the hero he was born to be. Along the way he gathers a band of friends to join him in his mission. Whether friends or foes isn't always evident and it's the mystery and journey of a hero that makes the book addictive and irresistible. Loved it, can't wait for book two. 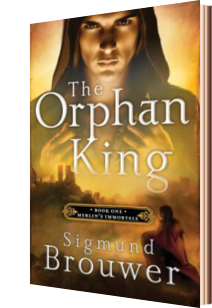 My greatest fear was that they would find us and make of us a sacrifice beneath a full moon. Now you, Thomas, must help us destroy the circle of evil.

The last words of a dying woman would change the life of young Thomas. Raised behind monastery walls, he knows nothing of his mysterious past or imminent destiny. But now, in the heart of medieval England, a darkness threatens to strangle truth. An ancient order tightens their ghostly grip on power, creating fear and exiling those who would oppose them. Thomas is determined fulfill his calling and bring light into the mysterious world of the Druids and leaves the monastery on an important quest.

Thomas quickly finds himself in unfamiliar territory, as he must put his faith in unusual companions—a cryptic knight, a child thief, and the beautiful, silent woman whom may not be all she seems. From the solitary life of an orphan, Thomas now finds himself tangled in the roots of both camaraderie and suspicion.

Can he trust those who would join his battle…or will his fears force him to go on alone?

Get a sneak peek and read the first chapter HERE.

Sigmund Brouwer is not only the acclaimed author of over 40 books that include several children’s series, he is also an inspirational speaker and co-founder of The Young Writer’s Institute. He has written fiction novels such as Blood Ties, Double Helix and The Weeping Chamber, as well as a non-fiction book, Can the Real Jesus Still be Found? part of his Truth is Out There series. Brouwer has a number of series targeting the 9-15 age bracket. His background briefly playing semi-pro hockey and his interest in sports serve as an ideal framework for his Lightning on Ice and Short Cuts series. Other series include: Watch Out for Joel, The Accidental Detectives, Mars Diaries, Winds of Light, Cyber Quest, Sports Mystery Series, and Bug’s Eye View. Upcoming releases from Brouwer include installments in the Nick Barrett Mystery Series and Degrees of Guilt series.

In addition to writing a vast number of books captivating enough to get children to read Sigmund Brouwer also approaches his writing from a different angle than is seen in most books. Many of his stories are written in the first person format, telling the story only through the main character’s point of view. This point of view is naturally restricting, yet Brouwer deals with the restrictions seemingly without a problem.

His work has been esteemed in Library Journal and Booklist; he has also received the Alberta Film and Literary Writing Grant twice. His articles have been published in Canadian and U.S. publications. Brouwer has made appearances on the Dick Staub Show, 100 Huntley Street, Home Network, Moody Radio and other Christian radio shows across the country.

Sigmund Brouwer is married to Christian recording artist, Cindy Morgan. They live in both Brouwer’s hometown of Red Deer and Nashville. They have a daughter, Morgan Olivia.


I received this book for free from WaterBrook Multnomah Publishing Group for this review.
Posted by April Erwin at 9/19/2012