Shiver me timbers! There's treasure to be had, Mateys, but first you must follow the Scavenger Hunt map! 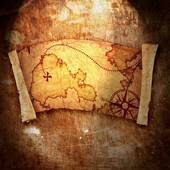 Kaye Dacus is hosting a Cover Reveal Scavenger Hunt across the blogosphere with booty every book lover can appreciate - you could win one of FIVE signed copies of Follow the Heart when it releases in May 2013. 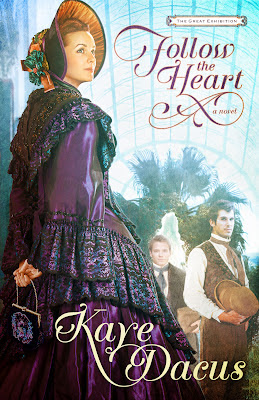 Kate Dearing’s life is turned upside down when her father loses everything in a railroad land speculation and she and her brother are shipped off to their mother’s brother, Sir Anthony, in England with one edict: marry money.


Though their uncle tries to ensure Kate finds matrimonial prospects only among the highest echelon of British society, her attentions stray to the one of the least eligible people at her uncle’s home—the garden designer.


Trying to push her feelings for the handsome—but not wealthy—man aside, Kate’s prospects brighten when a friend of Sir Anthony’s, a wealthy viscount, shows favorable interest in her. But will marrying for the financial security of her family be the right thing to do, when her heart is telling her she’s making a mistake? 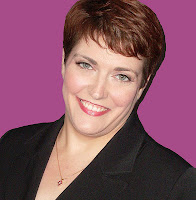 Humor, Hope, and Happily Ever Afters! Kaye Dacus is the author of humorous, hope-filled contemporary and historical romances. She holds a Master of Arts in Writing Popular Fiction from Seton Hill University, is a former Vice President of American Christian Fiction Writers, and currently serves as President of Middle Tennessee Christian Writers. Kaye lives in Nashville, Tennessee, and even though she writes romance novels, she is not afraid to admit that she’s never been kissed.
Directions:
Each participating blog has both an answer and a question—but the answers and questions aren’t on the same blog. DON’T POST YOUR ANSWERS HERE! Collect the questions and answers in an e-mail—along with the address of the site where you found each—to be sent to Kaye Dacus once you’re confident you have all of them and be entered to win one of FIVE signed copies of  Follow the Heart when it releases in May 2013. Visit http://kayedacus.com for the list of participating sites in the scavenger hunt and rules for entering the contest.
Here's what you need from my blog:
Post a comment telling us your what your favorite Kaye Dacus novel is and why.
Then collect the following questions along with my blog address to add to your Treasure List collection.
Question: How many items were on display at the Great Exhibition?
Answer: After reviewing and rejecting dozens of potential designs for the building to house his exhibition, Prince Albert had all but given up. But then he received a rough sketch on a scrap of paper from Joseph Paxton, the man who had designed the state-of-the-art greenhouses at Chatsworth. Prince Albert not only liked the innovative design, but appreciated the fact that the greenhouse design would allow them to build around the existing ancient elms and oaks in Hyde Park instead of cutting them down. Because of its glass-and-iron construction the building came to be known as the Crystal Palace.
Don't forget to list that you found them here on ProjectingA.blogspot, good luck!
For those who'd like to know my answer to the comment question:

I love all Kaye's books so it's hard for me to choose, but my favorite is probably Stand in Groom. Maybe because it was my first, or maybe because I just really identified with Anne, but it will always be special. :)

Kaye - I am going with standing in groom, for that is where I will start. I sm saddened I havent come across your books before:( - today is a new day
Jennifer

Kaye - I am going with standing in groom, for that is where I will start. I sm saddened I havent come across your books before:( - today is a new day
Jennifer

My favorite Kaye book is Ransome's Honor. It had been awhile since I'd found anything to read that kept me up at night and that one did. Probably one of my top faves in the last three years!

Thanks for hosting! I love Plethora too!

I love Ransome's Honor. I posted one comment, not sure if it got lost or not. It was one of the few books I sat and read and could not put down!

Thanks for hosting the hop!

I would have to say my favorite book is Ransome's Quest.
This adventure filled book is packed with action, mystery, intrigue and oh yes pirates.

Jennifer you won't be disapointed! It's a great place to start, if you're like me, you'll be a Kaye Dacus addict in no time. :)

I haven't read a Kaye Dacus book, but I too shall also start with Standing In Groom.

Debra, thanks for stopping by, I'm sorry you had trouble posting, you know blogger, sometimes it's persnickity.

I agree, Ransome's Honor rocks, I'm not sure Kaye can write a boring/slow story. :)

Hi Janella, thanks for stopping by. Seems like Ransome's Quest and Ransome's Honor are taking the votes. Got to love pirates. :)

I love all Kaye's books so it's hard for me to choose, but my favorite is probably Stand in Groom. Maybe because it was my first, or maybe because I just really identified with Anne, but it will always be special. :)

I have loved all of the 6 Kaye Dacus books I've read but I'd probably say that Ransome's Quest was my favorite! Though Ransome's Crossing was an extremely close second!

It's difficult to pick one, but I would probably say that Ransome's Honor was my favorite. I could read it over and over.

Going to go with Ransome's Honor. I love some traditional Regency (or Napoleanic, close enough) and I appreciated how it told a complete love story despite being an opener for a series.

I have only read her Ransome series, and I wasn’t able to get too into it. I think I rushed through them too quickly. I have a tendency to do that. I plan on giving that series another go at some point. Ransome's Honor was my favorite in the series though. But I am looking forward to The Great Exhibition series! And this scavenger has really fired up that interest into full blown excitement!

What is my favorite Kaye Dacus novel and why?--I don't have one, because she is new to me, but I am intrigued by Follow the Heart's description, and am interested in reading it.

For those of you who haven't read Kaye Dacus yet, I'm glad you're checking her out now. I know we have a lot of new fans in the works. :)