The Blue Door by Christa Kinde

Song Stuck on the Brain: Eternal Flame by The Bangles. Apparently I'm now sound tracking my dreams. This one played as a background track in a dream the other night and I woke up singing it. It's been stuck for 2 days straight now, this may be a record.

The Blue Door
by
Christa Kinde
﻿

In addition to having a fantastic cover, Christa Kinde has introduced a group of characters that will soon become your friends. The story is definitely written with a younger audience in mind, which is fine since that's how it is being marketed. I generally find that this genre can be read and enjoyed by any age if it's a genre you enjoy, this one definitely felt young to me though, so keep that in mind as you read.

Prissy's gift is introduced in this first book of the series, but the real meat of good vs. evil and the real challenge she'll face isn't presented clearly at all. However this is a series and the book does end in a pretty good cliffhanger, so I imagine they are leading into that more in the book 2. Or at least I hope they are.

Fantasy is very popular right now, and I'm a fan. I review a lot of SciFi/Fantasy novels. And I'm a Twilight fan too. Angels have kind of gained pop culture status, like vampires and werewolves and with that in mind, there are a lot of stories out there that present angels in all kinds of light and variety, not always good. Keeping in mind this is a Christian novel, they're presented positively, but I can't help but feel like it's a way to keep up with what's cool. I absolutely believe angels are real and still minister among us today under the direction and power of Jesus Christ. The angel Moroni appeared to Joseph Smith Jr. to bring God's message of his calling and to tell him about the Book of Mormon; and Angel ministry has a strong history in the restored church and among others as well. Also, I'm sure Angel's missions are varied and unknown to many. As Hebrews 13:2 says, " Be not forgetful to entertain strangers; for thereby some have entertained angels unawares."

I'd want to make sure that any reader, especially young readers, understand that Angels aren't fictional supernatural beings as the world would show, but real beings from God's realm that testify of Jesus Christ and the truth of His gospel.

Keeping those things in mind, enjoy the novel and keep an eye out for it's sequel. 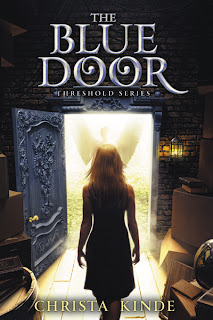 The first in a new series about 14-year-old Priscilla Pomeroy, who has the ability to see angels hidden among us, as well as the blue door that leads to the spiritual/heavenly realms. As we meet her and other characters, including behind-the-scenes angels, we learn that there is a reason Prissy can see these things, and she is a key player in a spiritual war unfolding around her.

ZonderKidz launches an exciting supernatural series for kids 11 and up. The Blue Door, the first book in The Threshold Series, introduces Prissie Pomeroy, a teen who discovers she can see what others cannot: angels all around. Even more startling is the surprising secret she uncovers about people she thought she knew. As she wrestles with this unexpected ability she must come to grips with the spiritual battles surrounding her. Especially when she learns she received this gift because God has a unique role for her in his bigger plan. But if she’s to fulfill it, she’ll need faith like never before.This exciting debut by author Christa Kinde draws on the rapidly growing interest in angel stories, an emerging trend in teen and preteen supernatural novels. Boys and girls alike will appreciate her gifted storytelling that captures their imagination with things beyond human sight. And parents will appreciate the family-friendly tone and godly messages maintained throughout this intriguing tale of adventure and spiritual warfare. 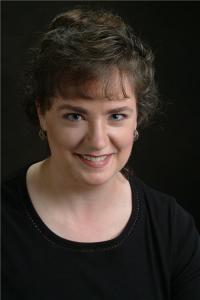 An avid reader who took up writing on a whim, Christa Kinde hails from Scandia, Minnesota, a small town on the fringes of the Twin Cities metro area. She attended Northwestern College in St. Paul, Minnesota, where she discovered the glories of singing in Latin, took biblical Greek as a second language, and learned to play a mean game of foosball. Nearly a decade later, she put her dual degrees in English and Bible to practical use. Everyday Living: Bible Life and Times [Thomas Nelson] was soon followed by numerous Bible study guides and workbooks, including award winning titles for Max Lucado and Women of Faith.

Christa and her husband Wayne lived for several years in rural West Michigan, then spent a handful more in Nashville, Tennessee. They’ve thoroughly enjoyed their travels throughout the United States and abroad and currently reside with their five children in San Diego, California. The Threshold Series [Zonderkidz] is Christa’s first fiction publication.

I received this ARC from Zondervan's Good Teen Reads for free.
Posted by April Erwin at 9/12/2012