Book 3 is finally here! I've been hooked on Robert Treskillard's Merlin saga since book one, Merlin's Blade. I'm a big fan of the Arthur/Merlin mythology and an even bigger fan of Celtic lore and history. It's not so uncommon to see the two linked together, but Robert did it in a truly new and unique way that has had me scrambling to keep reading ever since. Merlin's journey begins in book one with him as a nearly blind teen. Certainly not a version I'd imagined, but his path to courage and eventually guardianship of the prince Arthur is truly captivating. Book two Merlin is faced with some seriously dark choices and must once again battle evil to save the kingdom and still keep his faith. Now in this next book Merlin faces his biggest challenge yet. A nightmare coming to life, and a kingdom to help rally or watch it all be destroyed by evil.

It seems like with every book Merlin is faced with the same choice over and over. Choose faith and light, despite feeling like you stand alone, and fight the evil - Or give in to the darkness and let it take your soul and be miserable for eternity. Watch everyone sink into darkness. It's a tough challenge and although it seems like one only in fiction, it's one we all face everyday in ways we don't even realize. Merlin is a great example of each or us as humans, called to fight for Jesus and forced to face evil at every turn.

They're great, exciting reads but so much more than surface reads. If that's all you're looking for - you're good, the read is excellent. If you want something that can make you think, then look a little deeper. It's still there. 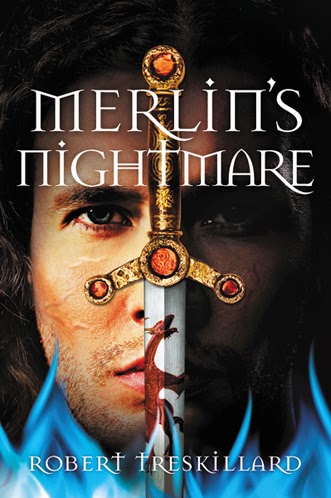 A King In Danger

Arthur, now eighteen, is missing, and Merlin must find him before a shadowy pursuer catches him first. With the high-king and his kingdom caught in a trap of sinister deceit, Merlin has to find a way out before all is lost.

Having everything to fight for, and almost nothing to fight with, Merlin and Arthur must rally Britain’s warriors against three overwhelming enemies: Saxenow hordes in the south, Picti raiders in the north, and a chilling new enemy that has arisen in the west.

And Merlin’s Nightmare Stalks The Land

Mórgana brings Merlin’s deepest fear to life and sets it loose to destroy Britain. But when the secret purpose of this nightmare is finally revealed, will Merlin and Arthur find a way to survive—without unleashing an even greater evil? Robert Treskillard is a Celtic enthusiast who has been crafting stories from his early youth, is a software developer, graphic artist, and sometime bladesmith. He and his wife have three children and are still homeschooling their youngest. They live in the country outside St. Louis, Missouri. It all began when Robert’s son wanted to learn blacksmithing and sword-making. The two set out to learn the crafts and in the process were told by a relative that they were descended from a Cornish blacksmith. This lit the fire of Robert’s imagination, and so welding his Celtic research to his love of the legends of King Arthur, a book was forged—Merlin’s Blade, book one of The Merlin Spiral, now published by BLINK Young Adult Books and available wherever books are sold.


Please visit the other tour members for more great info and fun!

Great blog tour post. I'm not a big fan of Arthurian stuff, but this book really caught my interest. I like that it's so well researched--- I know that era of history and mistakes would have put me off the book.

Thanks, Anna. I agree, even though I try to be lenient, I truly appreciate a writer that knows his/her research. It's distracting to be thinking of all the corrections you'd like to be making. lol. Robert is excellent with his research.

I love this series so much!!! I like how Mr. Treskillard made the Arthurian story so unique and brought such a refreshing take on the story.

April, I'm glad you dug deeper than the surface candy and found some strength and hope between the pages ... there's a lot of darkness in there, yet that can be true of some of our days as well, and we all need the faith to trust, no matter what.

Me too, Emileigh! Nothing better than a truly unique and captivating take on beloved tale. :)

You're right, Robert. There is a lot of darkness. Sometimes that would put me off, it all depends on how it's handled in the story. I felt it was worth it for the outcome and the depths of character it showed in so many different facets. Some of our days can feel that dark, it's always good to have the reminder that the light of Jesus overcomes. Faith is a fantastic message. :)

Given what the Arthur legend is about, I'm not sure that it could handled "truthfully" without darkness, want, and occasional despair.

And being the story of warriors and war chiefs, I think it's right to have battles and the threat of sieges and enemies at the gate be present and real to the reader. That was done fairly well in this book, I thought.

Very true, Kerani. Arthur and Merlin's tale has always been about good vs evil, right over wrong, making hard choices... It's one of the reasons I admire Arthur's character so much. Here we get the chance to see how he developed that character. Merlin taught it to him one very hard life lesson learned at a time. Then there's the fact that all Celtic lore is dark and violent in some way to match the history. So although the story may be myth, the setting and feel is very real to the period and really well written. I don't necessarily enjoy darkness and such, but done well it makes the light shine through so much brighter.