CFBA: Stuck in the Middle by Virginia Smith

Song Stuck on the Brain: Stuck in the Middle With You by Steve Miller Band

Stuck in the Middle 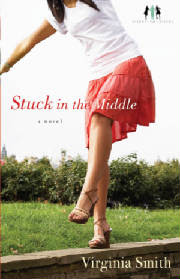 Joan Sanderson's life is stuck. Her older sister, Allie, is starting a family and her younger sister, Tori, has a budding career. Meanwhile, Joan is living at home with Mom and looking after her aging grandmother. Not exactly a recipe for excitement-or romance.

That is, until a hunky young doctor moves in next door. Suddenly Joan has a goal--to catch his eye and get a date. But it won't be easy. Pretty Tori flirts relentlessly with him and Joan is sure that she can't compete. But with a little help from God, Allie, and an enormous mutt with bad manners, maybe Joan can find her way out of this rut and into the life she's been hiding from.

Book 1 of the Sister-to-Sister series, Stuck in the Middle combines budding romance, spiritual searching, and a healthy dose of sibling rivalry that is sure to make you smile.

I enjoyed this book so much. Joan is an easy character to identify with, no matter your background. At least that's how I felt. I'm not an athlete, I don't run for fun. Nor do I have a broken family. But the issues that spoke to her heart, her struggles with faith and finding a closer walk with God, the insecurities about men and dating, all of those things spoke to me. I kept thinking, "Yes! I so get that!" Which, ultimately, says a whole lot about Virginia Smith's literary talents. Because in the long run, if I can't find a connection with the character, the book is worthless to me. I don't care how nice the grammer is, or how big the vocabulary, or if the flow is poetic. Virginia has all of that PLUS a great character. Kudos, Ms. Smith!


WHAT OTHERS ARE SAYING:

"A gentle story of one young woman's season of growth, deftly blending the tangle of family relationships with gifts of whimsey and revelation. A joy to read."
~SHARON HINCK, author of Renovating Becky Miller and Symphony of Secrets~

"Virginia Smith has created a charming and humerous novel that celebrates small-town life, generations of women caring for each other, and the value of finding a deeper, more active faith."
~SHARON DUNN, author of the Bargain Hunters mysteries~

Virginia Smith left her job as a corporate director to become a full time writer and speaker with the release of her first novel Just As I Am.

Since then she has contracted eight novels and published numerous articles and short stories. She writes contemporary humorous novels for the Christian market, including Murder by Mushroom (Steeple Hill, August 2007) and her newest release, Stuck in the Middle(Revell, February 2008), book 1 in the Sister-to-Sister Series.

Her short fiction has been anthologized, and her articles have been published in a variety of Christian magazines. An energetic speaker, she loves to exemplify God’s truth by comparing real-life situations to well-known works of fiction, such as her popular talk, “Biblical Truths in Star Trek.”

Virginia is a speaker, and an avid Scuba diver. She and her husband Ted, divide their times between Kentucky and Utah, and escape as often as they can for diving trips to the Caribbean!
Posted by April Erwin at 2/27/2008

Email ThisBlogThis!Share to TwitterShare to FacebookShare to Pinterest
Labels: CFBA, Stuck in the Middle, Virginia Smith