CSFF: The Shadow and Night by Chris Walley

Song Stuck on the Brain: I've Had the Time of My Life by Bill Medley and Jennifer Warnes


The Shadow and Night
by
Chris Walley 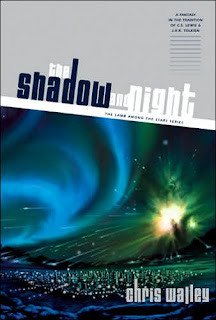 In the spirit of C. S. Lewis and J. R. R. Tolkien, The Lamb among the Stars series weaves the worlds of science and the spirit, technology and supernatural into something unique and haunting. On the faraway planet of Farholme, humans live in peace under the gentle rule of the Assembly. War and evil are ancient history. But suddenly, almost imperceptibly, things begin to change. Slowly a handful of men and women begin to realize that evil has returned and it must be fought.

When I received my reviewers copy, a letter was tucked inside from the author. After introducing himself and the book, he said something that resonated with the Celt in me, and I had to share it.

"We Welsh... are sceptical of empires and suspicious of kings; our sad monuments record the names of too many who left our villages to fight and never returned. When we lift our eyes us from these wet, stony soils our thoughts rarely turn to the practicalities of rule or wealth. Instead, we dream. We dream of the past, preferring Epics that look back to when we were a mighty people - and more rarely- we dream of the future. Above all we dream of things beyond this world: for us - as for all Celts - the boundary between the natural and the supernatural is thin and often breaks. We are well aware of sin and evil and, sometimes, grace. We are emotional, given to laughter, tears and the impulsive gesture but have a weakness for nostalgia. We are a people happiest with twilight rather than dawn. We have a love of tales of many words and a great liking for music, though we are perhaps too fond of slow, mournful tunes. But then, we have much to mourn. Yet for all our frailties, we produce heroes and we endure." - Chris Walley

Well said. Amen. That was my introduction to this astounding novel, and in many ways it made me feel as if the author and I had a connection through our heritage, as well as our love of a good story. Shadow and Night is a compelling work that more than anything, made me examine my beliefs and my motives both as a child of God and as an author. What more could you ask for? 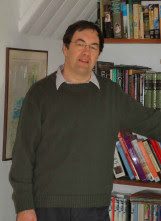 Chris Walley was born in Wales in 1954 but grew up in northern England. He studied geology at university, gaining a B.Sc. from Sheffield University and a Ph.D. from University of Wales, Swansea. He taught at the American University of Beirut (AUB) in Lebanon from 1980-84, where he met his wife and where their two boys were born. In the late eighties, Chris began writing in his spare time. He had two novels, Heart of Stone and Rock of Refuge, published under the pseudonym of John Haworth.

In September 2004 Chris started teaching again, geology and geography, at Gorseinon College on the edge of Swansea. He now teaches there full-time.

Chris and his wife live in an old cottage on the edge of Swansea and are very much involved in Pantygwydr Baptist church.

Visit the other tour members at:

Email ThisBlogThis!Share to TwitterShare to FacebookShare to Pinterest
Labels: Chris walley, CSFF, the shadow and night

What a great intro! I especially like the quote you pulled from the letter. Can I be honest? When I saw the 600+ page book and the multi-paged, I skipped the letter. (!!!) Maybe I should go back and read it. But, drat, it's still tucked in the book! It did make a great bookmark.

I read the letter, and not being Celt myself, wondered why a book required that much explanation. Shouldn't a novel stand pretty much on its own? I'm still not sure on that.

Val - I took issue with the letter too. I agree that the book SHOULD stand on it's own, and truthfully? If you need the letter to understand the book then something is missing.

I got that letter too, and thought it was really well written. Thanks for taking the time to excerpt it.

Valerie- I think the book needed explanation not becasue there was something wrong with it, but becasue Christians so often judge something simply becasue it is scifi or has the wrong theology.

Most likely his publisher required some sort of defense of his writing becasue Christians are so judgmental.

Shadow and Night is a compelling work that more than anything, made me examine my beliefs and my motives both as a child of God and as an author. What more could you ask for? What more, indeed!

As to the letter, I didn't get one since my review copy came much earlier as part of the process to decide if we wanted to include this book on the tour. As I recall, the editor contacted me asking for permission for Chris to include a letter. I take it this is something he put together just for the tour participants. I wish I'd gotten one! ;-) Seriously, I've read two different excerpts now and have been impressed with both.