Song Stuck on the Brain: Honor To Us All - Mulan

Watched the movie this morning with my honorary nieces. I've been singing it all day.

Sue's book hooked me right away. The plot is unique and compelling and the characters are so well formed. Agent Vic cracked me up, I love the idea of a semi-retired agent whose house boarders on hording and she lives in crazy house dresses, yet still has the grit to whip out her gun and take down the bad guys. All with heart and Christian insight too. And she's not even the main character.

In addition to great characters, her description of Florida was great. I've never been south of Mississippi, so it was like taking the ultimate vacation and reading a great suspense at the same time. I could see the colors and the crazy characters, smell the flowers and breathe the muggy air. It was so real. Great read. 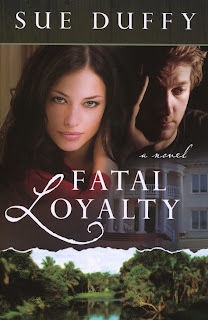 Where do you run when you know you cannot hide?

Andie Ryborg has nowhere else to go. Her father's campaign for governor and his aggressive war on drugs has chased her from their family home. Drawn to Miami's exotic Coconut Grove, Andie hopes to find a quiet refuge where she can discover herself apart from the public eye. But even in that seclusion, even with an officer assigned to protect her, Andie's privacy has been violated. Someone is watching

Evan Markham's entire life has been a tug-of-war between what is and what could be. He is drawn to a life that is beyond his reach and emotions have clouded his judgment. Evan knows that earning someone's trust isn't easy, especially when he plans to break it. But in the secret corridors of the criminal underworld, he knows what must be done, and he is determined to see it through. Whatever the cost

When enemies close in, a sudden turn of events leaves them both questioning. Where is God in all of this? Who is this enigmatic stranger who offers to help? They both know their lives are in danger. But what about their hearts?

If you would like to read the Prologue of Fatal Loyalty, go HERE.

Sue Duffy is an award-winning writer whose work has appeared in Moody magazine, The Presbyterian Journal, Sunday Digest, and The Christian Reader. Her first novel Mortal Wounds was published in 2001 and she has also contributed to Stories for a Woman’s Heart (Multnomah). She and her husband, Mike, have three grown children. Find out more at http://www.sueduffybooks.com/
Posted by April Erwin at 8/06/2010

Email ThisBlogThis!Share to TwitterShare to FacebookShare to Pinterest
Labels: CFBA, Fatal Loyalty, Honor To Us All, Mulan, Sue Duffy, Video

April, I wish I could take you on a tour of Miami myself. You seem to appreciate the setting so much. Thanks for such a glowing review of my book. Look for the sequel next year and another unrelated novel coming out in Fall 2011. Also my Web site: sueduffybooks.com.
Thanks again,
Sue Duffy

A sequel, that's fantastic, Sue. I can't wait. I'd love to see the Miami area. Except for the snakes. Those ya'll can keep. Otherwise, it sounds amazing. :)