Song Stuck on the Brain: My Love by Sia - Twilight Eclipse Soundtrack

The Malacca Conspiracy is high energy political suspense. No doubt about it. Don Brown is a talented writer.

I did find that it took a little while to get into the real action. Setting up the politics and the main issues that begin the intrigue took a good piece of the beginning, and although it was interesting I found it hard to follow at first. Probably because I'm not that into politics and this area of the world was completely unknown to me. Once established however, the main cast come in with a bang to save the day and it never really slows down from there.

I am a fan of political suspense, usually though it focuses around more common areas of the world. It was interesting to find a new part of the world to see into. At least new to me. Great writing. Check it out and see if you find Don's style as intriguing as the political hotbeds he writes about. 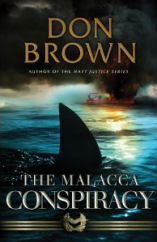 A rogue Indonesian general and his army of terrorists attack oil tankers in the Strait of Malacca in order to profit from oil futures and buy nuclear weapons to establish an Islamic superpower.

Navy JAG officers Zack Brewer and Diane Colcernian race against the odds and a 24-hour deadline before nuclear attacks hit the United States. Departing from the sea of books barely better than soap opera romance and using the frantic pacing of suspense fiction, Brown glides flawlessly among global hotspots of terrorism--including the United States--and the book's principal settings in Singapore, Indonesia, and Malaysia.

The President of the United States orders ships of the U.S. Seventh Fleet towards the Malacca Straits to reassert control over the sea lanes, but with time quickly ticking away, will they arrive in time for Zack and Diane to survive this dangerous and final high-stakes drama of life and death?

Sign up for the contest above! And if you would like to read the first chapter of Malacca Conspiracy, go HERE.

Paying no homage to political correctness, DON BROWN’S writing style is described as “gripping,” casting an entertaining and educational spin on a wide-range of current issues, from radical Islamic infiltration of the military, to the explosive issue of gays in the military, to the modern day issues of presidential politics in the early 21st Century.

DON BROWN graduated from the University of North Carolina in 1982, and after finishing law school, continued his post-graduate studies through the Naval War College, earning the Navy’s nonresident certificate in International Law.

During his five years on active duty in the Navy, Don served in the Pentagon, was published in the Naval Law Review, and was also a recipient of the Navy Achievement Medal, the Navy Commendation Medal, and the National Defense Service Medal.
Posted by April Erwin at 8/18/2010