Song Stuck on the Brain: Hear You Me by Jimmy Eat World

I enjoyed Twilight Serenade a lot. Maybe because I felt like I could identify with Britta in some ways, even though I don't play an instrument and I haven't been secretly in love with someone for 17 years. Her character though, felt like a reflection somehow of me and I found that appealing. Her struggle with choices and balancing her own desires with God's will and the wants of those around her was real and compelling. But her ability to love was inspiring. Seeing that love save those around her was a beautiful experience. 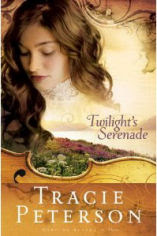 Britta Lindquist left Sitka six years ago in an attempt to distance herself from the love of her life, Yuri Belikov. Upon her return, she finds Yuri absent and his wife about to deliver a child. When tragic circumstances ensue, Britta suddenly finds herself caring for Yuri's children--and her life intertwining with the man she's tried so hard to forget.

But Britta's other great love is for the violin, and her talent is recognized by Brenton Maltese, a conductor from England. He proposes she accept the coveted first chair position in his orchestra...and also his hand in marriage. At a crossroads, Britta must determine what her heart truly longs for--and if she's willing to fight for it.

At a Crossroads, Britta must determine what her heart truly longs for─and if she's willing to fight for it.

If you would like to read the first chapter of Twilight's Serenade, go HERE.

Tracie Peterson is the bestselling, award-winning author of more than 85 novels.

She received her first book contract in November, 1992 and saw A Place To Belong published in February 1993 with Barbour Publishings' Heartsong Presents. She wrote exclusively with Heartsong for the next two years, receiving their readership's vote for Favorite Author of the Year for three years in a row.

She teaches writing workshops at a variety of conferences on subjects such as inspirational romance and historical research.

Tracie was awarded the Romantic Times Career Achievement Award for 2007 Inspirational Fiction and her books have won numerous awards for favorite books in a variety of contests.

Making her home in Montana, this Kansas native enjoys spending time with family--especially her three grandchildren--Rainy, Fox and Max. She's active in her church as the Director of Women's Ministries, coordinates a yearly writer's retreat for published authors, and travels, as time permits, to research her books
Posted by April Erwin at 8/04/2010