Song Stuck on the Brain: “Dealer, Dealer, Give me some news, I’ve got a bad case of Credit Blues…” It’s a STUPID car ad that I heard on the radio this morning. I don’t even know what dealership it’s for, but I’ve been singing it over and over ALL day long. Driving me NUTS. 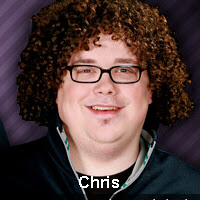 So it’s Bye-Bye Sligh. I’m so sad! It irks me that Chris got kicked off when Haylie and Sanjaya are still in. Cute or not, Sanjaya just doesn’t have musical chops. So he needs to go. He made it into the top 10, he’s going to get to tour, enough is enough. *sigh* I hope Chris Sligh gets to use this time to move forward in his career even without Idol. A lot of former contestants have made a name for themselves despite losing, I hope he’s one of them. I’d buy his CD.

CFBA: This is day two of the tour for RECLAIMING NICK by Susan May Warren.

Nick Noble, the main character has his own blog. I clicked on over today to check it out, and it’s a lot of fun. Here’s Mr. Noble’s bio. Go check it out, it’s got the first chapter as well as some interesting tid-bits.

Nick Noble: Bio
Age: 28
Height: 6'1
Occupation: Former Detective, MP, current...waiter? The fact is, I'm in between places, but I know one thing -- Even if my father left Cole St. John half our ranch, it'll be over my cold dead carcass before he gets even one blade of Silver Buckle grass.
Looking for: Why on earth would I want to get close to a woman again after my gal up and married my former best friend? Sure, I guess I wouldn't mind having someone who believed in me, made me think that maybe I might be more than the man I see in the mirror. But I'm not a dreamer, and I don't believe in Happily Ever After....Or maybe I just don't deserve it.
I'm still reading this one, but so far it's good.
Contest:
Don't forget to enter the contest to win a free copy of The Assignment by Mark Andrew Olsen. Click the book cover at the top right to email your entry. Contest ends Sunday, April 1, 2007 at midnight.
Just one more workday until freedom…
A.
Posted by April Erwin at 3/29/2007