Nsync with the world

Song Stuck on the Brain: Take your pick of any Nsync song. 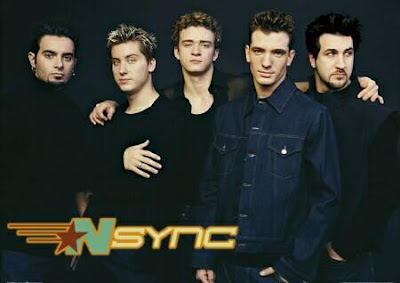 I've listened to Nsync ALL day long. Which is nice because I rarely get to listen to them at work. My office mate can't stand boy bands, but he was out sick today. You might think that would get too repetitive, but I've got around 200 minutes worth of Nsync music. That's not including their Christmas cd, cuz I can't listen to Christmas music in March. So really, I'm only hearing each song about twice. I've got the albums, the bonus tracks, plus the obscure tracks, like their Chilli's commercial and the Superbowl halftime song with Aerosmith, Mary J. Blige, Nelly and Britney Spears.

Does this seem like a strange obsession? I don't remember ever being this big of a fan before Nsync. I mean I did like the New Kids on the Block and Osmand Second Generation in grade school and junior high, but not anything like Nsync. And probably none as much since Nsync.

1. I've seen them in concert five times. Once each in Kansas City, MO, Little Rock, AR, Indianapolis, IN, Ames, IA and Memphis, TN. Ames was by far the best concert. We were front row and just to the back of the side of the stage in the stadium, which put us really close when they came up on the catwalk behind the band. Plus the pyros were so close that every time they blew the heat would blast us, blowing our hair back. Afterward, we found ash on our clothes. It was awesome. We wanted to see more, but we'd reached the limit of our budgets.
2. I've seen the Bigger Than Live Imax concert at least four times. I lost official count, but it was a lot. I even have the Imax poster. Yes, I actually went down to the theater and asked for it. They gave it to me.
3. I have all the Nsync bobble heads, still in their box. 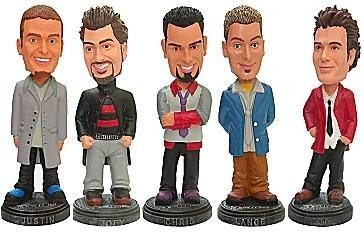 4. My favorite was Lance. Yes I know he's 'out' now, but that doesn't change the fact that he was a CUTIE!
5. I have all the Nsync performances, interviews and music videos on tape and DVD.
6. I know dance moves to Bye Bye Bye, Makes Me Ill and Digital Get Down. Probably could remember some of the other too if I tried.
7. I have all of the Nsync Ty Beanie Bears.
8. I subscribed to J-14, a teen mag, just so I could get the pics and scoop on the 'guys'.
9. I wrote an 'Ode to Nsync'. Of course it was actually a joke that I emailed to my sister and friend just before we went to the Indianapolis concert, but I still have it. Just know, that if you aren't familiar with the Nsync songs or nick names or 'quotes', this will not make a lot of sense to you.
Ode to NSYNC
By April Erwin
7/23/01


Ha ha, Hoo hoo.
Justin and Lance too.
Here come the boys
With a bunch of new toys!
Guess what? Guess who?
NSYNC this song is about you!
Get ready Indy, here we come
We love NSYNC... Some.
Okay, you're right
We think they're really tight!
They're so hot, they're so fine
You bet they gonna blow my mind!
Ha ha, Hoo hoo
My little Poo Foo
Here we come to watch the show
Ya know NSYNC has got the flow!
I'm all excited about the show
And all the pyro's they're gonna blow.
Ha ha, hoo hoo, hee hee
Don't you know it's gonna be me!
So rock the show real hard, JC
We're tired of seeing just TV
It's gotta be fun, it's gotta be loud
It's gotta be a rowdy crowd
And when it's all said and done
We'll cry and say, "I can't believe they're GONE!"
10. Wow, do you really need any more proof that I'm an idiot?
Just to make up for going on so long, here are a few fun quizzes you can take too.
Have a great weekend,
A.

What Flavor Ben and Jerry's Ice Cream Are You?

What Color Is Your Brain?

What Planet Should You Rule?

How Quirky Are You?

What Pattern Is Your Brain?

What Bumper Sticker Should Be On Your Car?
Posted by April Erwin at 3/23/2007

I have a confession to make as well: The NSYNC Bobble heads freak me out. I never bought them for that reason.

My dad bought me one and I seriously put it in a trunk and piled books on top of it.