CFBA: A Passion Most Pure by Julie Lessman

Song Stuck on the Brain: Private Eyes by Hall & Oates

A Passion Most Pure 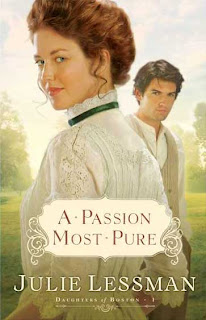 She's found the love of her life. Unfortunately, he loves her sister ...

As World War I rages across the Atlantic in 1916, a smaller war is brewing in Boston. Faith O’Connor finds herself drawn to an Irish rogue who is anything but right for her. Collin McGuire is brash, cocky, and from the wrong side of the tracks, not to mention forbidden by her father. And then there’s the small matter that he is secretly courting her younger sister. But when Collin’s affections suddenly shift her way, it threatens to tear Faith's proper Boston family apart.

Refusing to settle for anything less than a romantic relationship that pleases God, Faith O'Connor steels her heart against her desire for the roguish Collin McGuire. Collin is trying to win her sister Charity's hand, and Faith isn't sure she can handle the jealousy she feels. Full of passion, romance, rivalry, and betrayal, A Passion Most Pure is Book 1 of the Daughters of Boston series. 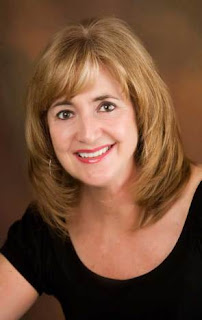 Julie Lessman is a debut author who has already garnered writing acclaim, including ten Romance Writers of America awards. She is a commercial writer for Maritz Travel, a published poet and a Golden Heart Finalist. Julie has a heart to write “Mainstream Inspirational,” reaching the 21st-century woman with compelling love stories laced with God’s precepts. She resides in Missouri with her husband and their golden retriever, and has two grown children and a daughter-in-law. A Passion Most Pure is her first novel.
Posted by April Erwin at 1/30/2008

Email ThisBlogThis!Share to TwitterShare to FacebookShare to Pinterest
Labels: A Passion Most Pure, CFBA, Julie Lessman

I'm glad to see Julie's book introduced on so many web sites. Thanks for taking the time. It just intensifies my determination to watch for my opportunity to get the book and read it for myself.
Pam