Author Donita K. Paul registered the holiday in honor of her DragonKeeper Series, and it has flourished like Kale's dragons.

You can send a Dragon Greeting, Make your own dragon, or watch a Dragon Movie.

I happen to love Dragon stories, so to honor the day, I'm listing a few books you should definitely check out.

Donita's books are a given. Read them. Love them. Tell everyone you know about them. 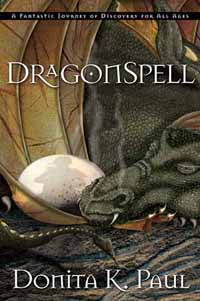 DragonSpell
Book 1 in the DragonKeeper Chronicles
by Donita K. Paul

One Dragon Egg Holds the Key to the Future.
Once a slave, Kale is given the unexpected opportunity to become a servant to Paladin. Yet this young girl has much to learn about the difference between slavery and service.

A Desperate Search Begins...
A small band of Paladin's servants rescue Kale from danger but turn her from her destination: The Hall, where she was to be trained. Feeling afraid and unprepared, Kale embarks on a perilous quest to find the meech dragon egg stolen by the foul wizard Risto. First, she and her comrades must find Wizard Fenworth. But their journey is threatened when a key member of the party is captured, leaving the remaining companions to find Fenworth, attempt an impossible rescue, and recover the egg whose true value they have not begun to suspect...

Weaving together memorable characters, daring adventure, and a core of eternal truth, Dragonspell is a finely crafted and welcome addition to the corpus of fantasy fiction.

The series continues with DragonQuest, DragonKnight, DragonFire, and SOON, DragonLight.


Another favorite Dragon series is by Romance Author Shana Abe. I will warn you, the two series couldn't be more opposite. Ms. Paul's, are allegorical adventure stories, steeped in Christian faith. Ms. Abe's are secular romances. But I adore both series.

You are cordially invited to taste the clouds and hunt the moon. You are invited to learn how to fly....

Imagine a world where clouds could be dragons, and dragons could be people...where diamonds beckon with silent songs and a beautiful runaway turns out to be an infamous jewel thief who dissolves into smoke with just a whisper of a thought.

Now imagine the drákon lord sent to capture her.

For centuries they've lived in secret amid the green and misted hills of northern England, shapeshifters who have the ability to Turn from human to smoke to dragon, and back again. They skim the sky and haunt the stars, powerful beyond thought, beautiful, sensual. They are the drákon.

Like any hunted beast, they've survived the centuries by learning silence, by keeping the secret of the tribe absolutely sacrosanct. But one of them has broken the rules, has run to eighteenth-century London and is using his powers to steal fabulous gemstones. Dubbed the "Smoke Thief," he's the most serious threat to the drákon in memory. Christoff Langford, Marquess of Langford and Alpha of the tribe, has sworn to bring the runner home at any cost.

But even Kit doesn't realize that the Smoke Thief is a woman.

Rue Hawthorne is a halfling: half drákon, half mortal, and an outcast in both worlds. As a little girl she loved Kit from afar. As a woman she knows better to trust her heart to anyone, especially the charismatic, ruthless leader of the drákon. She fled her home to escape a forced marriage to him; as the first female in four generations to complete the Turn, she knows she'll be considered Kit's property. Rue, however, has much bigger dreams than that.

A spectacular diamond is missing, Kit's hot on her heels, and Rue's about to find out that even thieves can have their hearts stolen….

This is a continuing series as well. Dream Thief and Queen of Dragons are available now, with two more books proposed.

I know there are a million Dragon Tales out there and I'm positive I've missed a great deal of fantastic ones. Share them with me? I'd love to know which dragon fuels your imagination the most.