I love Mary's sense of humor! She has a way of writing about men and women and their relationships that has me laughing out loud. Her females are tough and sassy and completely capable on their own, but when they find the right man they're okay with becoming part of a team. The men are tough and sensitive and a little clueless sometimes about how the female mind works, but that makes them all the more endearing. Underneath the humor though, is an even stronger message about God's faithfulness and it's woven in so flawlessly, that it's part of the fabric of the adventure.

What more can I say? I loved it. I'm on pins and needles waiting for book 3. I'm hoping it's about Hannah... . 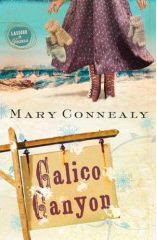 Let yourself be swept away by this fast-paced romance, featuring Grace Calhoun, an instructor of reading, writing, and arithmetic, who, in an attempt to escape the clutches of a relentless pursuer, runs smack dab into even more trouble with the 6R's - widower Daniel Reeves, along with his five rowdy sons. When a marriage is forced upon this hapless pair - two people who couldn't dislike each other more - an avalanche isn't the only potential danger lurking amid the shadows of Calico Canyon. Will they make it out alive? Or end up killing each other in the process?

Running from her Abusive foster-father, a man intent on revenge, the prim and perfectly proper Grace Calhoun takes on the job of schoolmarm in Mosqueros, Texas.

As if being a wanted woman isn't bad enough, Grace has her hands full with the five rowdy and rambunctious Reeves boys─tough Texan tormentors who seem intent on making her life miserable. When, in an attempt to escape from the clutches of her pursuer, Grace is forced to marry widower Daniel Reeves, father of the miniature monsters, she thinks things couldn't get any worse. Or could they?

Daniel Reeves, happy in his all-male world, is doing the best he can, raising his five boys─rascals, each and every one. Since his wife's death in childbirth, Daniel has been determined never to risk marriage again.

When God throws Grace and Daniel together─two people who couldn't detest each other more─the trouble is only beginning.

Will this hapless pair find the courage to face life together in the isolated Calico Canyon? Or are their differences too broad a chasm to bridge?

If you would like to read the first chapter go HERE 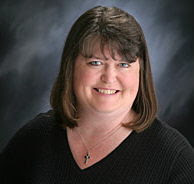 MARY CONNEALY is an award-winning author and playwright, married to Ivan a farmer, and the mother of four beautiful daughters, Joslyn, Wendy, Shelly and Katy. They live in Decatur, Nebraska. Mary is a GED Instructor by day and an author by night. And there is always a cape involved in her transformation.

Mary has also written Petticoat Ranch, Golden Days, and her latest, Alaska Brides that will debut in August.
Posted by April Erwin at 6/26/2008

Nice review. This one is a finalist for June for CFBA!

Glad you enjoyed Mary's latest! And yes, her next book will feature Hannah :).

I'm working with Mary and am wondering if you would be interested in an interview with her. If so, please contact me through my Web site.