Song Stuck on the Brain: She's Got the Look

Anyone see the new TV Land show by the same name? Kind of nice to see older ladies showing that they're still as beautiful (or more so) than the younger set.

I was pleasantly surprised by this book. It was an interesting take on what has seemed to me to be, an over done theme. Not so much the Amish/Mennonite part, but the struggling to stay in the lifestyle. Maybe I'm just not reading enough of them to see a wide variety, but I will admit to kind of being bored with them. But Hidden had an interesting and exciting plot. There was intrigue and emotion and although the Amish beliefs were very much there, it didn't feel contrived or forced. I totally bought the ending. I actually want to read the sequel. See? Surprised myself. :) 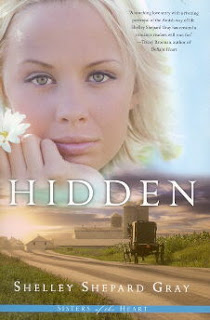 Hidden is a remarkable story about the unlikely love between a modern girl on the run and an Amish boy from the family who shelters her.

When Anna decides it's time to leave her abusive boyfriend, she doesn't know where to turn. Rob is a successful and respected person in her community. He has completely won over her parents with his good looks and prestigious position at a top law firm. Only Anna has seen his dark side. But when Rob hurts Anna yet again, she realizes that she must finally help herself.

Desperate, she runs to the one place she’s always felt completely safe, the Amish Brenneman Bed and Breakfast, where years ago she and her mother once stayed, and where Anna met life-long friend Katie Brenneman. When Anna shows up years later unexpectedly, the family welcomes her in, with few questions asked, and allows her to stay, dressed as the Amish in Plain clothes, and help around the inn.

But Katie’s older brother Henry doesn’t take too kindly to the intrusion. Anna wonders if it’s because he’s already had his heart broken. To Henry’s shame, from the moment he sees Anna, he feels a strong attraction. To cover his infatuation, he tries to ignore her, knowing no good would ever come from keeping an eye on a fancy woman like her. But as he sees that Anna has a good heart and is not the selfish, spoiled woman he imagined her to be, he feels his heart pointing towards her.

Anna comes to realize that she’s found a home and true love in the last place she’d expected. How can she deny the life she left behind? And will her chance for happiness be stolen away by the man who can’t seem to let her go?

If you would like to read the Prologue, go HERE

Hidden is Shelley’s first foray into inspirational fiction. Previously, Shelley lived in Texas and Colorado, where she taught school and earned both her bachelors and masters degrees in education. She now lives in southern Ohio where she writes full time. Shelley is an active member of her church. She serves on committees, volunteers in the church office, and is part of the Telecare ministry, which calls homebound members on a regular basis. Shelley looks forward to the opportunity to write novels that showcase her Christian ideals.
Posted by April Erwin at 6/30/2008

Nice, conversational type review. Not quite long enought to final (being too long hurts even more than being too brief) but I liked it.