GRPR: Along Came a Cowboy by Christine Lynxwiler

Along Came A Cowboy

by
Christine Lynxwiler
About the Book: 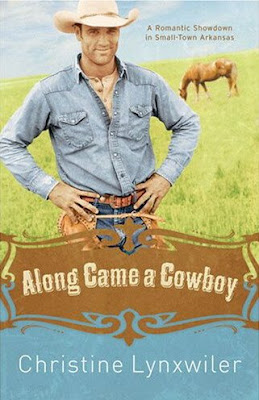 From the outside looking in, local Chiropractor Dr. Rachel Donovan seems to have it together. She’s returned to her hometown of Shady Grove and runs a thriving Chiropractic practice. She’s be nominated as Shady Grove’s Citizen Of The Year, and appointed to the committee planning the town’s major centennial celebration and rodeo. Unfortunately, on the inside everything is not as it appears.

The committee duties come with baggage—cute, cowboy baggage to be precise. Jack Westwood is the epitome of the stereotypical cowboy; rugged, handsome and bull-headed. While he makes everyone else swoon, Rachel is determined to not get involved any more than necessary. She knows his type—T-R-O-U-B-L-E.

Unfortunately, the fallout from a mistake that Rachel made fifteen years ago still echoes today threatening to ruin her sterling reputation and bring the whole façade tumbling around her . She thought she had buried it deep in her past, but while she’d moved on she never really moved past that summer. Even though she knows that God has forgiven her, she’s having a harder time forgiving herself.

Can the woman who has devoted her life to healing others allow God to mend her own hurt? Will she seize the opportunity to reconcile with her past and open her heart to love again? Will she come to terms with her mistake and forgive herself before her opportunity at love fades into the sunset?
My Take:
I'll admit, I don't read westerns as often as I used to, because I got burned out. But every once in a while a story comes along that interests me enough to give it a try and this was one of them. I really enjoyed Rachel's story and Jack? Well, maybe cowboy's should make a comeback, because Jack is awesome. :)
About the Author:

Award-winning author and past president of American Christian Romance

Writers, CHRISTINE LYNXWILER has numerous novels and novellas published with Barbour, including Arkansas, Promise Me Always, and Forever Christmas.
She and her husband, Kevin, along with their two daughters, four horses, and two dogslive in the foothills of the beautiful Ozark Mountains in their home state of Arkansas.

Q. In Along Came A Cowboy, the lead character struggles with forgiving herself for a past sin that has had a major impact on her life. Why do you think it is easier to forgive others than to forgive ourselves or even to accept forgiveness.

A. I don’t know the answer to that, but I have a few ideas. First, I think we hold ourselves to a higher standard than we do others. Or we might feel, like Rachel did, that if we beat ourselves up enough about the past, then we’ll feel worthy of forgiveness. Also, it’s much easier to give than it is to receive. Same goes with forgiveness. Maybe because our pride isn’t battered by forgiving someone, but being forgiven implies owning up to sin and recognizing that we can’t fix our mistake on our own.

Q. What would your advice be to someone who is struggling to come to terms with a past indiscretion?

A. Obviously, if you’re a Christian, I’d advise giving the past to God and once you’ve repented and asked His forgiveness, forgive yourself, forget it and move on. But that’s a little simplistic for most of us. I think many of us tend to do what Rachel does in Along Came a Cowboy and magnify our own sins. What seems like an unfortunate little stumble on someone else’s path can appear to be a plunge to certain death on our own life’s road. So consider how you’d feel about a friend or loved one if they’d done exactly what you did. If the answer is, “I’d forgive them” then forgive yourself. You deserve no less kindness and mercy from yourself than anyone else does. If that doesn’t work for you and you have children, ask yourself how you would feel if your child did this thing. Would you still love them? If they turned from this sin, would you forgive them? If the answer is yes, then your Heavenly Father still loves you and forgives you too, so it’s time to let it go and forgive yourself. If the answer is no, then maybe your current sin is an inability to forgive others and that’s a whole ‘nother problem.

Q. When you’re writing, what do you use as your inspiration?

A. Inspiration and ideas come from everywhere. But as I said in an interview recently, I’m an Arkansas country girl, born and raised on a farm, and currently living in the most beautiful small town (in my opinion anyway) in the Ozarks. So these are the places and people that inspire me to write. My books are almost all set in small town Arkansas. My characters are rarely ever patterned after one specific person. Instead each one is a conglomeration of people I meet and interact with every day. I get inspired when I ask “What if?” That’s the neverending question and asking it usually will bring more stories than one person can write in a lifetime.

Q. What do you enjoy most about writing Christian fiction?

A. One thing that I used to complain about that I’ve now come to enjoy is the fact that all my books have a common theme—God is in control. Sometimes it’s the main theme, sometimes it’s just an underlying thread. Each story line is very different from the last one, but the theme is always there. As this theme emerges in a new story, it brings me joy and sometimes even laughter because I know that this is a lesson God is patiently teaching me. I told someone recently that around book seven I began to look for a new theme. “I’m going to get boring,” I wailed. But apparently, even now on book fourteen, I haven’t quite mastered this “God is in control” concept, because inevitably by the end of the book, my character is struggling to come to terms with the fact that she is not in the driver’s seat of her own life. Now when I start a story, I look forward to seeing how this particular theme is going to show up.

On a more serious note, I enjoy knowing that the stories God allows me to write not only entertain, (which is why I wanted to be a writer) but that they also touch readers’ lives in a deeper way than I could ever imagine or take credit for. And for that, I’m eternally grateful.

Q. As an award-winning Christian romance writer, do you have any advice for novice or aspiring writers?.

A. Never give up. And once you’ve decided that you’re not quitting, join American Christian Fiction Writers. The annual fee of $50 will be the best money you ever spend on your writing career. And don’t just pay the dues and not get your money’s worth. Join a critique group. Get to know other writers. Dedicate yourself to learning the craft. And never quit learning. Being published isn’t the end of the journey. It’s only one step along the way to being the best writer you can possibly be. Settle in for a long, bumpy, exhilarating ride!
Posted by April Erwin at 6/23/2008

Email ThisBlogThis!Share to TwitterShare to FacebookShare to Pinterest
Labels: Along came a cowboy, christine lynxwiler, GRPR