CFBA: Deep in the Heart of Trouble by Deeanna Gist

Song Stuck on the Brain: Four Minutes to Save the World by Madonna and Justin Timberlake

This week, the Christian Fiction Blog Alliance is introducing:
Deep In The Heart Of Trouble
by
Deeanna Gist
(Bethany House June 1, 2008) 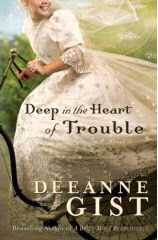 A Texas-Sized Tale of Unexpected Love

Essie Spreckelmeyer is the last woman anyone in Corsicana, Texas, expected to see with a man on her arm. Independent and outspoken, she’s known more for riding bicycles in outrageous bloomers than for catching a man’s eye.

And the last man who seems willing to give her a second glance is Tony Morgan, newly hired at Spreckelmeyer’s oil company. The disinherited son of an oil baron, Tony wants most to restore his name and regain his lost fortune--not lose his heart to this headstrong blonde. She confounds, contradicts, and confuses him. Sometimes he doesn’t know if she’s driving him toward the aisle or the end of his rope.

That’s how life is ...Deep In The Heart Of Trouble

"Gist does it again! Her signature prose is consistent and she delivers a thoroughly delightful and entertaining story that’s worthy of our time and attention. Not only won’t you want to put this book down, you’ll want to enjoy this story again and again."
-- JUNE TOP PICK, 4-1/2 STARS, Romantic Times, Jennifer Reyes

"Gist has once again written a delightfully humorous historical romance. After reading the first book in this series of two, I was anxious to get my hands on this one. Let me tell you, I was not disappointed ... It is a spectacular, feel-good story which I highly recommend. You will definitely be glad you read it."
-– FIVE STAR RATING, The Romance Studio, Brenda Talley

I've been waiting pretty anxiously for this one ever since I read Courting Trouble. Essie Spreckelmeyer might be more tom boy than I ever dreamed of, but when it comes to romance (or the trouble in finding it), we might just be soul mates. Deanne has a way of tapping in to a girls innermost thoughts and feelings and then laying them out for the whole world to see. Reading Essie's story even made me understand my own motivations in life a little better. Her books really are a treasure worth adding to your personal library. 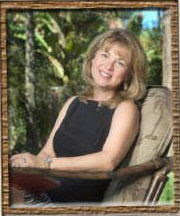 Deanne Gist has been a busy lady. She had a career in elementary education. She raised four children. In fifteen years she has: run a home accessory/antique business, member of the press, penned freelance journalism for a few well-known publications, People, Parents, Family Fun and more. She was the CFO for her husband's engineering company, she did all this in her home.

She also founded a publishing corporation for the purpose of developing, producing and marketing products which would reinforce family values, teach children responsibility and provide character building activities. In answer to Gist’s fervent prayers, God sent a mainstream publisher to her door who licensed her parenting I Did It!® product line and committed to publish the next generation of her system, thus freeing Gist to return to her writing.

Eight months later, she submitted A Bride Most Begrudging to Bethany House Publishers and they picked it up for their new "edgy inspirational" line of historical fiction. After its release in July 2005, Bride hit eight best seller lists and has sold over 100,000 copies and won the Christy Award for BEST ROMANCE 2006. The Measure of a Lady was her 2006 summer release. It hit five best seller lists and won the Christy Award for BEST ROMANCE 2007. Gist is contracted to have a new book come out every summer. Courting Trouble was her 2007 summer release and it hit three best seller lists.

Deeanne lives in Texas with her husband of twenty-four years. They have two kids in high school, two in college.

Email ThisBlogThis!Share to TwitterShare to FacebookShare to Pinterest
Labels: CFBA, Deeana Gist, Deep In the Heart of Trouble